Beware of Nisse the Christmas gnome in Denmark! 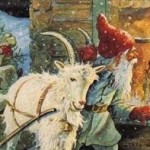 The mischievous Danish gnome, Nisse, plays pranks on people during Christmastime. He is said to live in the lofts of old farmhouses and wears gray woolen clothes, a red bonnet, red stockings and white clogs. On Christmas Eve, many Danish families leave some rice pudding or porridge for him so that he is nice to them.

Children are not allowed to see the Christmas tree until dinnertime on Christmas Eve (known as Juleaften) and parents decorate it secretly with home-made baubles. The trimmings are usually baubles, paper hearts and cornets, tinsel, garlands of Danish flags and especially candles, which may be either real wax candles or chains of electric candles. In connection with the wars against Germany and the awakening national consciousness in the 19th century, the decorations became dominated by the national colours, red and white.

Christmas dinner is generally a feast of roasted duck followed by risalamande (rice pudding with whipped cream served with cherry sauce) as desert. An almond is hidden in the pudding, and the person who gets that piece receives the so-called almond present, which traditionally was a marzipan pig. With their dinner, most people today drink red wine with the main course and a dessert wine with the dessert. The warm rice pudding is sometimes accompanied by sweet light beer, also called Yule brew.

After that the Christmas tree is lit up, and everyone dances around it singing Christmas carols.

In Denmark the presents were originally brought by the pixie, the old farm leprechaun or household god, who dates back to the pre-Christian era, but was associated with Christmas in the 19th century. Father Christmas arrived in Denmark in the late 19th century, literally on the postcards sent home from America by Danish emigrants and others. He gradually took over the pixie’s old role as present-bringer.

“Helen’s marketing direction is insightful and pays large benefits to her clients. She is resourceful and there is no end to her network of collaborators that make up a collective skill-set that is unmatched. Her years of international experience allow her to fully understand cultural differences that may arise before they happen, thus avoid potential pitfalls that most would miss.”